By Lynn Cressy on October 5, 2017 in Baby Boomers Reminiscing

Do you know that vinyl sales are steadily increasing each year even though on-demand audio streaming continues to grow in popularity?

The latest news is that vinyl records are projected to sell 40 million units in 2017. Wowzers!  That means that sales are nearing the $1 billion benchmark for the first time this millennium. The peak of the industry was in the 1980s.

According to Deloitte, in 2017 new vinyl records and revenue will enjoy a seventh consecutive year of double-digit growth. However, vinyl will account for only 6%. The broader music industry revenues are projected to be approximately $15 billion this year!

According to one 37-year-old collector, his “modest” collection is a very highly-curated mix of 2,000 albums. Some are old and some are new!

There are many reasons why vinyl is superior to any other music listening format. These reasons include the fidelity, romanticism and ritualistic nature of the experience. “Listening to vinyl is a physical act – it’s an active choice to go to the rack and pull out a record from the sleeve and then eventually flip the side to continue listening. It physically forces you to interact, contrary to telling Alexa to play a playlist on Spotify.” Source…

Another reason for people wanting vinyl is to own something that you can hold in your hand. The artwork on the cover of an album is another massive draw. “You can go into a record store, buy the first Velvet Underground record and bring home a Warhol!” Source… 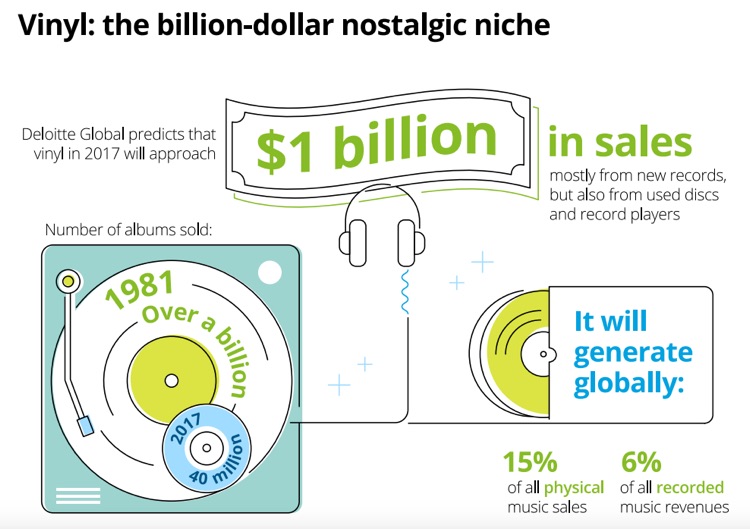 It isn’t a coincidence that the vinyl resurgence in 2008 coincides with the launch of Spotify. You might say that vinyl is similar to the print industry. As streaming continues to grow (and change), there will always be a market for the emotional impact of something tangible such as a vinyl record. That nostalgic tie is powerful!

For a little more background on the growth of the vinyl record sales, here is information for the time period of 2005-2015.

According to the Nielsen ratings, 2015 was the tenth straight year for growth of vinyl sales. In 2005, there were about 900,000 vinyl records sold in the U.S. This grew every year with sales reaching just under 12 million for the year 2015.

The most popular genre was ‘Rock.’ Independent music retailers find vinyl sales very important to their music revenue. CDs haven’t done so well with sales falling from 141 million in 2014 to 126 million in 2015.

Vinyl Sales – Going Strong and the Over 50 Crowd is Loving It!

Related Post: Do You Remember – Music from the ’70s

View all posts by Lynn Cressy →
Music from the ’70s for the Over 50 Crowd!
Wrigleys Vintage Chewing Gum Machine